Saturday the twenty-third of November, the day Spartan history was made. The inaugural Stadion UK event took place in the iconic Twickenham Stadium, home of English Rugby. A race that created the first ever Stadion winners in the United Kingdom for both adults and children alike.

Before the race I was both excited and scared. On one hand I was excited about racing in the stadium, while on the other I was nervous about entering a competitive wave with such a different terrain from the normal OCR events I was accustomed to. As I woke up on that cold wet Saturday morning my stomach was in knots knowing that it was almost time for the race to begin. I started to question my choice of footwear. I had swapped from my usual OCR trainers to ones I wear everyday just for fun. I began to wonder should I have really practised running up and down stairs like my Dad had suggested? A plan that didn’t happen as my Mum wasn’t happy about it and didn’t think our neighbours would appreciate it either. My last ditch attempt to practice this was also foiled, I was told by a hotel worker that the stairs were for emergency evacuation only and I was restricted to elevator use. So there was nothing else I could do. With my race clothes on and my KitBrix on my shoulder I exited the hotel and made my way towards the Stadium.

As I arrived I got to walk through the famous Rose and Poppy gate in which many heroes of the rugby world had done so before. As I entered the brilliant venue some of my nerves were replaced with more excitement. I bumped into some friends who I usually see at these events and with the usual merchandise stands and podium in view things started to feel a bit more familiar.

The familiarity soon came however to an abrupt end, the other competitors and myself were directed away from our supporters and out of their sight. We were led into the England rugby team changing room where we sat and chatted for a short time. I couldn’t believe that I was sitting where many legends had previously sat. It really added a special feeling to the event. Minutes later we were taken out into the open to the start line. The legendary Spartan Phil was waiting for us to arrive and after shouting out three essential Aroo’s we were off!

As we all dashed off in a pack I found myself in second place behind an older and much taller boy. I chased him for the first part of the race before finding the perfect opportunity to overtake. Arriving at the A-frame I blasted into full gear racing up it quickly, over the apex and rolling back down to take the lead. Afterwards, multiple flights of stairs stood in my path which I soon learnt was to be a huge part of this Stadion race. Once conquering the stairs I moved onto the Z wall, balance beam and multi-rig which all boosted my lead. As I came down the stairs I was greeted by the Atlas ball carry and pleased to find no burpees were required. At this point I couldn’t see my opponents and began to sprint down a long section of the course before hopping and jumping through a series of tyres. After the Hercules hoist, spear throw, cargo net and once again flights of stairs, my first lap was done. Knowing I now had a strong lead my nerves disappeared completely, and I got to just enjoy this awesome course.

Coming to the end of the race it was only a few hurdles that stood in my path to the finish. Flying over them I reached the end with a smile on my face knowing I had done it. I finished in first place. I then turned around to cheer on my friends crossing the orange finish line and was so pleased so many of them had also made the podium. We all had huge grins on our faces.

For me this really was my favourite Spartan event and can’t wait to do it all again next year. I’ll still be running in mud regularly but happy to mix it up with a few stairs and iconic venues any day.

A big shout out to Spartan UK and all the workers and volunteers who made this happen. 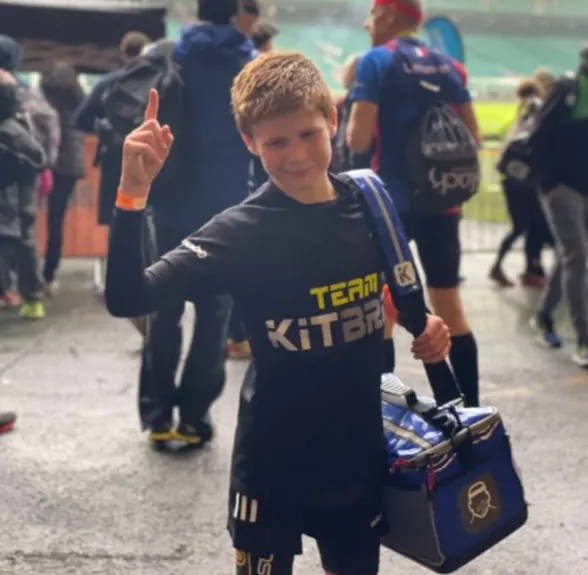